Marija was attended an International School of Temple Arts – ISTA Training Level I, held in Fethiye, Turkey, from 30 April – 07 May 2022.

SPIRITUAL… SEXUAL… SHAMANIC… each of these three areas alone carries enormous potential for liberation, freedom, love, and joy, as well as charge for shadow and misuse of power.

Thousands of people on 5 continents in over 40 countries have attended ISTA trainings over the past 10 years.

Many have been radically changed by uncovering reactive patterns and transforming them into conscious and more loving ways of being.

In the following lines, I will try to describe how love, attraction and sexuality are expressed in Serbia. I started my little research with the definition of the word Love in our dictionary. I came across an interesting definition: “Love as an experience of heightened vitality and power, which fills the individual with joy; has no root in the biological, but in the psychological need of man to solve the problem of his existence.” “Solving the problem of existence” says a lot about how love and relationships are understood in Serbia.

And further: ” Husband and wife and their children make up the family. The family, almost as a rule, is not free from sin and sinfulness, so it often takes a long time until it is completely dominated by harmony and love. Each of its members must fight hard against self-love to learn to live in community with others”. Therefore, self-love is also considered as the greatest sin 🙁 And so, on and so forth…

Serbia is a country to which it is communism brought gender equality. At least on a paper. Although women became more and more emancipated and educated and equal in the workplace with men after World War II, a deeply established attitude that woman has a place in the kitchen and that man is the main ones in the household, is still very present.

Although the sexuality is everywhere around us, in the newspapers and television, as my mother says, „we only see naked tits and asses”, there are essentially so many taboos about sexuality. There is no sex education subject in the school. It all comes down to biology, and the explanation of gender characteristics and differences, and how babies were born. Everything that teenagers learn about gender relations is through an Internet and from porn movies. The standards of big tits and inflated lips are being pushed in all directions. Girls make monsters out of themselves to get married well. The term “sponsorship” is widespread. An army of well-dressed men and top-dressed girls, competing in selfies, are dominant on the street, in cafes, popular clubs. Only appearance is what matters. Everything is sexual and nothing is sexual.

As for earlier generations, they were at the other extreme. I remember my grandparents coming out of the room if someone was kissing on TV. For me, my mom and dad were totally asexual beings. Not the letter “s” from the word sex was ever mentioned. We never-ever talked about this “thing” at home. My mom has never given me any advice about sex and relationship with the opposite sex. Nor about love. As if that goes without saying. And I knew absolutely NOTHING. I left home for college at the age of 17 with the advice “watch what you do”! Was it a warning, or a threat, or advice? I don’t know, I only know that I have dedicated a good part of my life to research my sexuality, believing that there is something else besides the fear of not being pregnant. Btw, I discovered a self-pleasuring at my age of 26!!

Marriages are held for the sake of children, for the sake of economic security, for the sake of reputation in society, etc. Working on yourself in the field of sexuality is in very low percentage. Compering to the rest of the country, in Belgrade, there are still a number of people who deal with topics related to sexuality, but mostly women.

For men, it is an absolute defeat to admit that they suffer from ED, for example. He, Shiva, would rather give up his sex life than to seek for help. On the other hand, women agree that it is normal for sex to last 5-7 minutes, the man comes and turns to the other side to sleep. And that’s it! Furthermore, through my practice, I realize that men are learned to be quiet, to reach climax without any movement, any sign that it is something going on in the body… stone face, very sad. No breathing, no movement, no sound.

Domestic violence is quite common, which I believe is the cause of sexual frustration in many cases, but this is another huge topic.

There is a lot of promiscuity around, quantity comes first instead of quality. Not to mention the idea of ​​spiritual upliftment throughout sex!? It is a kind of a fairytale! It all comes down to some primary, animal instinct, without any upgrade.

And so, on and so forth… I hope that I have at least partially managed to get closer to the picture of views on love vs. sexuality vs. relationships in Serbia nowadays.

Spirit Level at BEYOND Temple II

Marija participated in the Beyond, the Tantric Temple of Deep Delight – In Sexual Purity, held in Holland, 6 to 11 December 2021.

Beyond is a place for truthseekers and wholehearted conscious beings with already a firm inner foundation, able of holding themselves through deep inner shifts & storms, who can open in surrender to the deeper grounds of trust. Willing and celebrating of meeting it all and rising in full embodiment through it all. 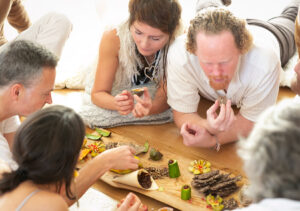 Photo by: Daniela Dušková and BEYOND – Tantric Temple of Deep Delight

Marija was attended an International School of Temple Arts – ISTA Training Level I, held in Brać, Croatia, from 7-13 November 2021.

SPIRITUAL… SEXUAL… SHAMANIC… each of these three areas alone carries enormous potential for liberation, freedom, love, and joy, as well as charge for shadow and misuse of power.

Thousands of people on 5 continents in over 40 countries have attended ISTA trainings over the past 10 years.

Many have been radically changed by uncovering reactive patterns and transforming them into conscious and more loving ways of being.

Spirit Level at BEYOND Temple I

Marija was attended in October 2021 the BEYOND, unique, high-quality & luxurious in-depth space of Mystery, where we descend into the unknown. Into deep human connection – real, raw and refined. A deep relaxation into truth. Expanding and awakening into divine humanness and exhilarating consciousness.
In a way, yet unheard of.

BEYOND is a ceremonial field of deep presence, a space of Sacred Sexual Alchemy. A Mystic School, deeply transformational, where Tantra, Shamanism and Ritual Art invite you in your deepest. Where light, dark, spirit and sex becomes one, meeting and melting through our armours.

A Sanctuary for the Soul where Life becomes Living Art. Where all seen and unseen aspects in and around you are being propelled and lit up.

Highly recommended for the truth-seekers and wholehearted conscious beings!